The former territory of the extinct Contrada della Spadaforte has also been partially included in Leocorno. The other piece is part of Torre. Legend says that the chiesa di San Giovannino, where the Oratory of the district is currently located, originated on the ruins of an ancient Jupiter temple.

A small bell (campanile) has been preserved at the headquarters of the neighborhood. The legend says that this is the “martinella” of the Carroccio that was used during the Battle of Montaperti (1260) where Siena defeated the Florentines. The Oratory of Leocorno San Giovannino in Pantaneto is located in Piazza Virgilio Grassi. The entire contrada life of the Leocorno district takes place on and around this square. The church was built in the 16th century on an old Romanesque building dedicated to John the Baptist from the thirteenth century. On the walls of the church there are 15 painted stories about the life of John the Baptist. First the chapel of the church was used for meetings of the neighborhood. Between 1776 and 1869 the church was used by the district as an Oratory. Afterwards they had to move to the nearby Chiesa di San Giorgio. The church has been in use by Leocorno since 1966.

The baptismal fountain is located in Via Pantaneto and was designed by Carlo Nepi in 1997.

The Festa Titolare in honor of San Giovanni Battista is celebrated on June 24. 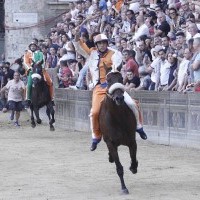 Leocorno counts 31 wins. The last one dates from 17 August 2022 when Tittia won on Violenta Da Clodia.

Between August 16, 1704 and August 18, 1776, Leocorno won no Palios. 72 years the neighborhood had to wait for a new victory. In the 18th century Leocorno only achieved 3 victories. A depth record.

Since 1980, when the “cuffia” after 24 years as “nonna” went away, they won 7x the Palio in 35 years, a nice average. As a result, they have grown as a neighborhood from a very small neighborhood to a mediocre population.

The motto of the Contrada (Fiede et risana al para l ‘c’ho in fronte) refers to the old belief that the horn of the unicorn was an all-healing panacea. Legend says that the unicorn comes from the Narwhal, a type of whale with a huge horn. You can also find an authentic Narwal horn in the museum of the neighborhood. Leocorno, formerly one with Torre under the name “Liofante” is the only neighborhood that has changed its name throughout history. At old public parties, Leocorno came out with a leopard (Leopardo). Later they started using Leocorno, the unicorn.

The change of name and logo had consequences for their Palio history and happened several times. For example, they did not win any Palio under the name Leopardo for 72 years (between 1704 and 1776). In 1800 it was decided to go through life as Leocorno. That became Leopardo again between 1827 and 1902.

In 1902 it became Leocorno, with the unicorn as a symbol. Since then it has won no less than 13 of the in total 30 Palio won!

The name of the neighborhood is popularly abbreviated to Leco.

Leocorno grants itself two additional victories, not recognized by the City of Siena: