The Drago, Chiocciola, Giraffa and Onda neighborhoods were the first neighborhoods of Siena with their own symbol. At the “Gioco delle Pugna” of 1494 they already came out under that name. In some old documents, even in 1481, Contrada del Drago is already being discussed, and this without public events. Until the mid-17th century, the Drago district was limited to houses and shops. From 1650 the San Domenico church and the accompanying monastery to Camporegio are also considered. From 1679 they even want to contribute to the costs of the Palio, on condition that, in case of victory, the Palio also could be shown on the altar of the San Domenico. This arrangement lasted almost a hundred years and ended as a result of a disagreement after the victory of Drago in the Palio of July 2, 1738.

Drago is also the neighborhood with the oldest preserved medieval costume in “Spanish style” from 1839. The baptismal fountain is located behind the gate for the entrance door of the Oratory. It was made in 1977 by Vico Consorti.

Drago and the Palio 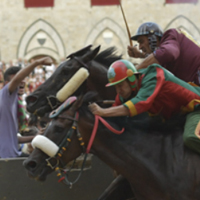 The Palio della Pace has entered history as one of the most turbulent ever. What should have been a celebration of the end of the World War led to a real battle. Bruco, who had set their sights on this Palio and wanted to win at all costs, managed to bribe everyone, including the mossiere. Only Rubacuori, Drago’s fantino, didn’t want to know about a bribe. Two false starts (perhaps because Bruco did not start well) and Tartuca’s withdrawal (due to disagreement with those false starts) made it interesting without the course even getting started. Bruco (of course) started best of al participants. They remained in the lead until the final round. Followed by Rubacuori on the 19-year-old Folco (the horse with the most victories in the history of the Palio). In the final round, Drago passed Bruco and won. However, this was not appreciated by the Brucaioli who tore up the drappellone and treated the Dragaioli present to a few punches. A few months after the Palio, Drago got a new drappellone. This time with a small adaptation of the painter: on the Drago logo the dragon got a small caterpillar in her mouth.

A contrada that never had an enemy

Drago is the only Contrada who has never had an official enemy. Despite the difficult period with Lupa in the 50s and 60s, and more recently with Selva and Bruco. None of these disagreements has been translated into a rivalry. Drago is also the district with the most ‘political stability’ in Siena, on average, the terms of office of its leaders last longer than in any other district.