Andrea Anastasio’s drappellone, made for the Palio on August 16, dedicated to the Assumption of the Madonna was presented on August 10 in the Cortile del Podestà of Palazzo Pubblico. The press unanimously agrees that the work is characterized by research and innovation.

Instead of the usual image technique, the author opts for digital printing on sequins and manual embroidery, so that creativity and an interdisciplinary approach can give the work the energy and freshness needed to celebrate the first Palio dell’Assunta after the pandemic.

The result? A perfect and very original dialogue between the Sienese tradition and the imaginative genius of an artist like Andrea Anastasio who manages to make the drappellone not static, but “alive” through the movements of the thousands of sequins sewn on the front. The face of the Virgin Mary is that of Titian. The heads of the two horses that ideally make up Mary’s mantle are taken from San Marco’s quadriga, now housed in the Marciano Museum in Venice.

The symbols of the Contrade are represented as real animals to compose a bestiary in the sky of Siena, while the reference to the colors of the heraldry is given to the ten barberi lined up on the left of the composition . All elements come from a garden of red roses and white lilies where nothing is left to chance. The rose symbol of the Madonna and the lily of S. Caterina da Siena. The Palazzo Pubblico is also outlined at the bottom.

Under the warm and brilliant light, the visual effect of this artistic creation evokes not only the festive and opulent dimension of light, but also that of a medieval armor. A suit of armor intended to protect and at the same time be a reminder of the fierce battle of 10 peoples for a cloth cloth.

Past and future live side by side in the composition and techniques chosen by the artist, paying tribute to the spirit that animates Siena, which has always been linked to its history, but is able to relive and renew it, and always projecting forward.

This polarity also animates the structure of the banner that faithfully reproduces the same image of the front on the back, but no longer at the heart of its precious explosion in thousands of sequins, but in the static tranquility of the icon.

The whole speaks to us about the complexity of our time and demonstrates the effectiveness of the hybridization of artistic languages, from design to fashion, animated and held together by the compositional rigor of a conceptual matrix.

All these elements are part of the artistic history of the author who has always experimented and worked in these worlds: artistic practice, industrial design, fashion, architecture, continuation of an old line that reaches us from the Renaissance, through authors of the twentieth century century.

At the end of the Corteo Storico that precedes the course, this drappellone by Andrea Anastasio will parade. It will be an elegant and penetrating overture to the next Palio. 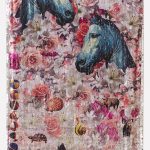 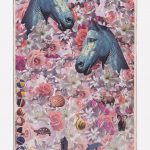